But O, it was a deplorable condition for a poor man, who, day after day, kept up an unceasing call to his oxen, struggling at the end of a chain.  In that lonely forest, without neighbours, penniless, friendless, his home a wretched hovel, his raiment and his fare scanty, his toil endless, no condition out of actual slavery could be more wretched.  But, thank God! there was hope, and to that we may attribute his success. - History of Perth County 1825-1902 - William Johnson
Agricultural Timeline 1851-1872:
1827 - Canada Company founded, takes control of Crown Lands for organization to encourage settlement in the Huron Tract (Queen's Bush)

1838 -The Wellington District is established, including parts of the future Wellington, Waterloo, Grey and Dufferin Counties.

1851/52 -Squatters begin arriving in the new territory with hopes of laying a claim before the land is put up for sale.  (Squatters will be given first access to purchase the land they've been clearing) 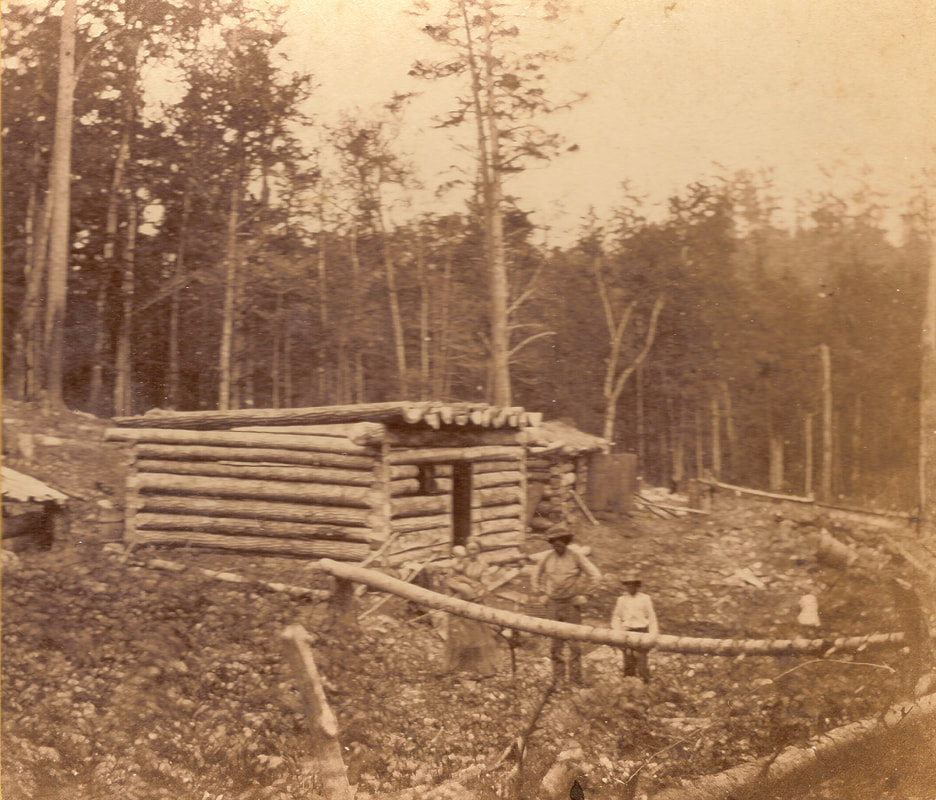 Image from a Stereoscope labelled "First Settlers, Palmerston Canada West"
​1852-54 - Survey teams from the Canada Company begin evaluating and marking out the lots and concessions of what will become Minto and Wallace Townships.

Typically the Minto pioneer arrived on foot with an axe, perhaps a gun, and a pack containing flour, salt, tea, frying pan, blanket, a change of socks and some small tools.  First came the punishing job of brushing, chopping, piling, and burning the bush, save only enough logs to put up a temporary slant-roofed shanty... The first seeding was done by hand, between the stumps...gradually they disappeared too, ripped out by ploughs and burned. - History of Minto Township - Clifford Harrison

1855 - After a winter of attempting to clear their parcels of land the Minto and Wallace Settlers begin planting crops amongst the tree stumps. 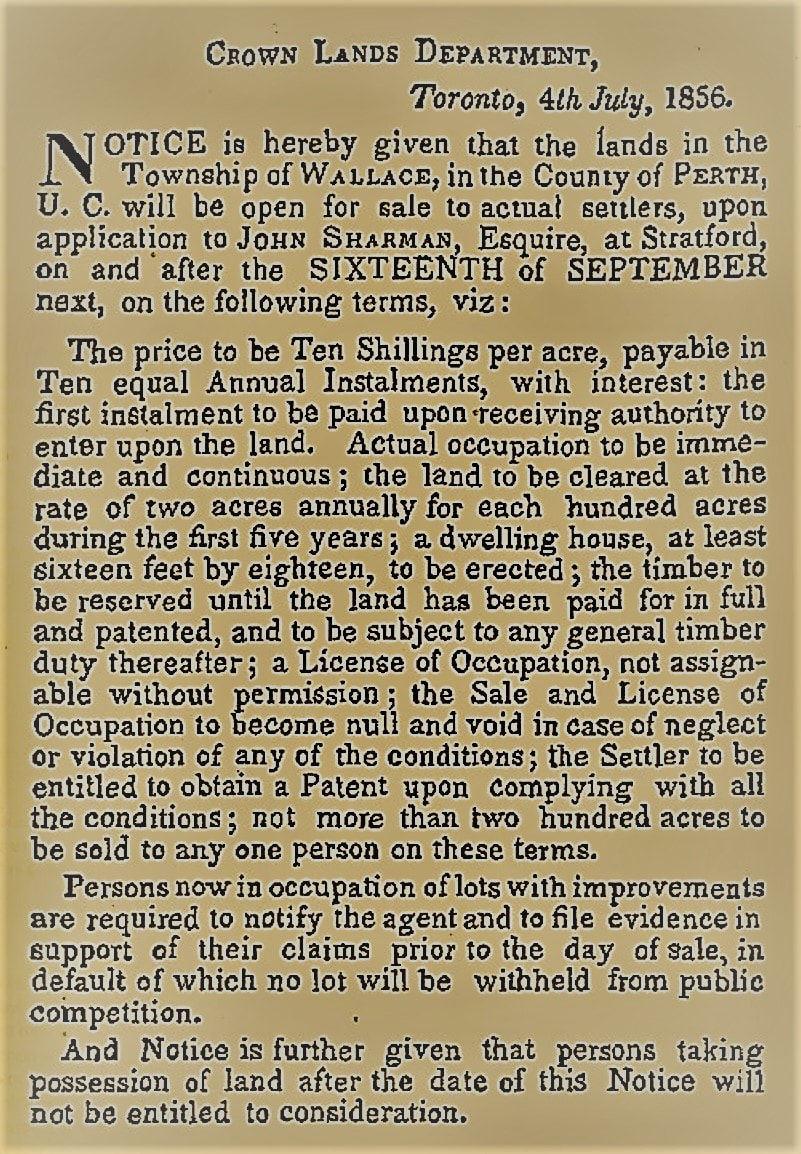 This, without exception, was the system adopted by all old settlers for a number of years until the stumps could be removed.  Destroying these old obstructions was a joyous period for the pioneer.  On a dark October night, everything dry as tinder, the spectacle of ten or fifteen acres of burning stumps was a most enjoyable one. - History of Perth County 1825-1902 - William Johnson

1858 - A dry summer and a Wheat Midge plight devastates crops, numerous settlers foreclose on their debts and leave Minto and
Wallace.

1859 - After years of complaints from residents in Minto an investigation is conducted finding that 20,000 acres of land has been left unoccupied and un-cleared due to illegal purchase by speculators (primarily the Land Agents from Elora in 1854).  The land is seized and re-opened for sale.  The "Second Wave" of settlers begins. 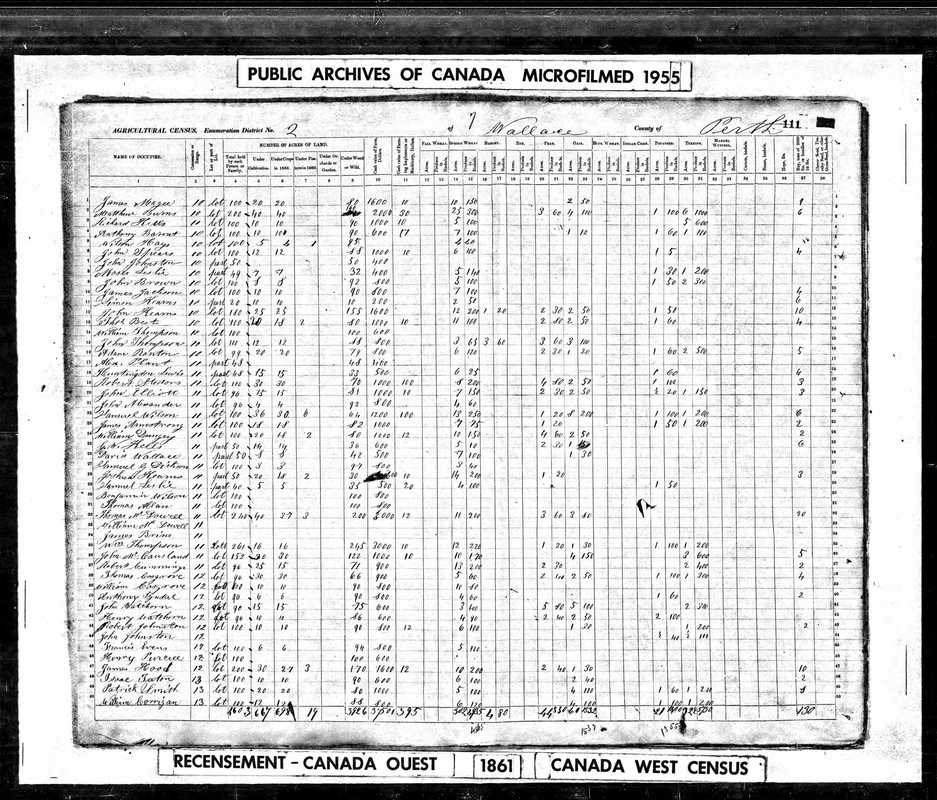 1861 Agricultural Census for a portion of Wallace Township
​
1863 - Gravelling of the Elora and Saugeen Road is completed making the trip to the closest large markets (Elora and Guelph) for farmers significantly easier.

1863 - The wheat midge devastates the spring wheat crop again, the introduction of winter wheat (impervious to the midge) becomes the favoured crop.

1864 - An Act of Parliament approves a proposal to build two railway lines from Guelph to Southampton and Stratford to Kincardine, rumours begin circulating in Minto and Wallace about the economic boom a railway could create.

1866 - The first Post Office is established at Dryden. Managed by Richard Johnston

1867 - The first Clyde Horses are imported from Scotland into Perth County, up to this point oxen were the common work animal of choice.

1867-1868 - The Wellington, Grey and Bruce Railway, supported by the Great Western Railway actively promote the benefits of the railway to farmers in Wallace and Minto Townships in the hope they will pressure for large bonuses to pay for the building of lines.

1868 - Listowel declines providing a financial incentive to the Wellington, Grey and Bruce Railway to build a line through the town.

1870 - The Wellington, Grey and Bruce Railway purchase 12 acres of land from Thomas McDowell and William Thompson on the border of Wallace and Minto Township.

1871 - April - The Wellington, Grey & Bruce Railway announce they will be building a station on Lot 19 of Concession 11 of Wallace Township.  The land owner Thomas McDowell and adjacent farms immediately begin having their land surveyed for town lots in what would become Palmerston.

1872 - January 25 - County of Perth establishes a monthly public fair (market) to be held in Palmerston.

​1872 - February 8 - First cattle fair held in Palmerston, the community hosts social events such as dinners, tea meetings, speeches and a choir performance for the travelling buyers.

The train whistle signified a change of pace in Minto... a much greater and more meaningful change occurred, the change from farming at a subsistence level to a cash crop position.  No longer did the wagon trains with their meagre loads bump over the long road to Guelph, three days down and back...  Surely no one would ever refer to the 1860s as the good old days.

Now the farmer could herd his live cattle the few miles in to town where he sold them for cash on the hoof.  And in the same towns the freight cars waited to load his surplus wheat and his salt pork.  And the same train would soon bring industry to his neighbourhood, industry dependent on the produce and raw materials which only the farmer could provide.

So each became dependent on the other - the farmer on the town and the town on the farmer - and the trains were responsible for it all. - A History of Minto - Clifford M. Harrison