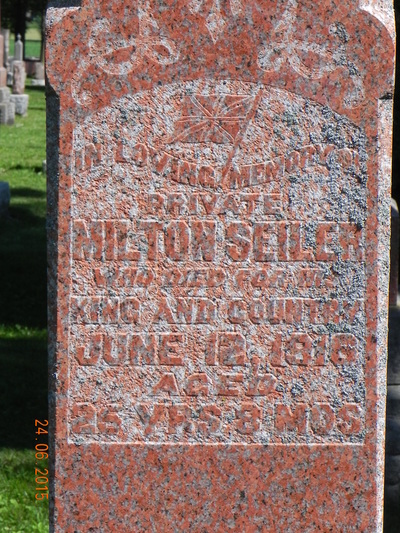 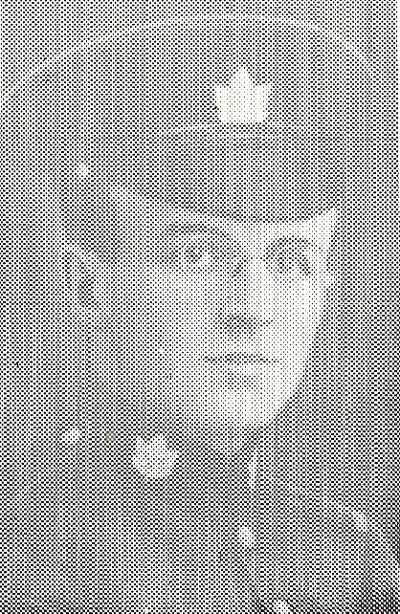 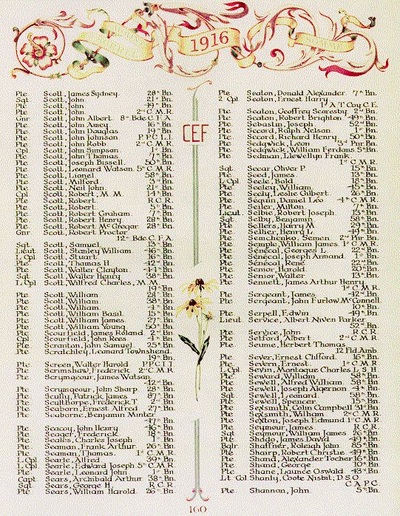 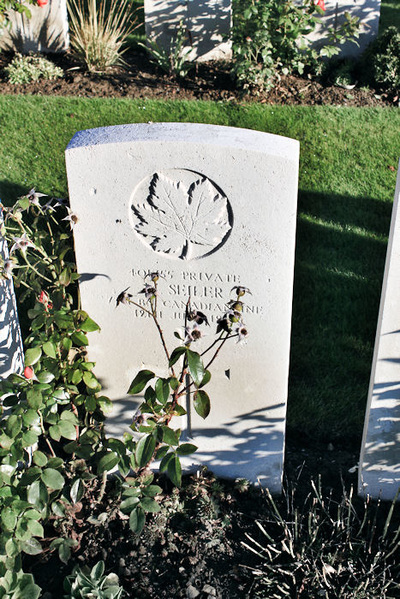 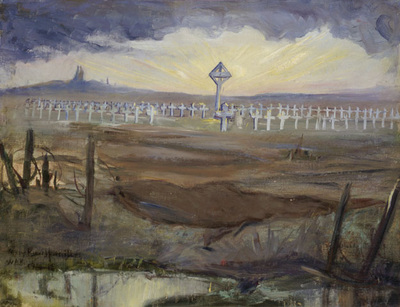 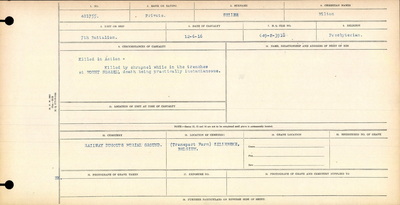 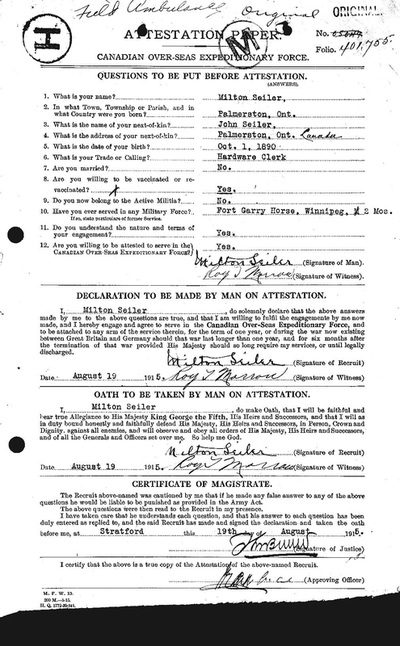 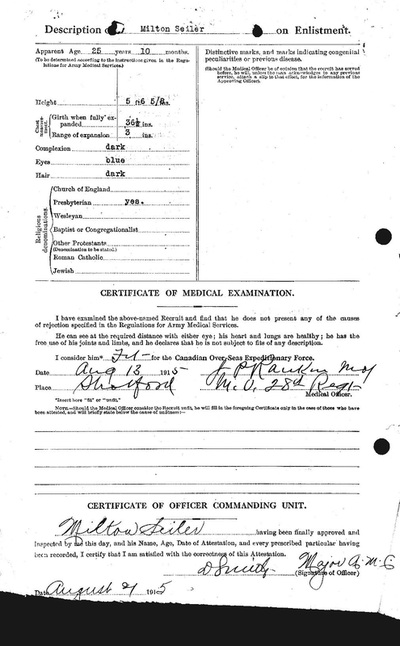 Download File
Over the last 100 years we often hear about the young men from Canada's farms flocking to answer the call for King and Country.  Young fresh faced boys who knew little or nothing of the world beyond their immediate community.  Palmerston saw its fair share of its citizens put on the uniform, many from the surrounding country side despite famers being considered essential workers.  Those who went early still believed it was to be a grand adventure, a stable paying job and most likely a short time away from home.  Or at least long enough to come back more "worldly".

Milton Seiler, was one of those fresh faced country boys to take up the call to arms.  His true intentions are not known, but the likelihood of it being primarily patriotic fervour is probably not the case.  Unfortunately, little is known about Milton's early life growing up just west of Palmerston.  The son of German parents, his Grandparents and their family, like many others in the area (author included) came to Canada via Pennsylvania as refugees after the failed peasant revolution of 1848 in Germany.  His parents John and Christina bought a 100 acre parcel just north of Dryden (west of Palmerston) and continued farming the land for many years.
Milton was the youngest of four children and worked on the farm until he was ready to strike out on his own.  Like make young men with farming experience the call of the prosperous west was alluring and Milton headed to Winnipeg, whether it was to work the harvest or to capitalize on the potential business opportunities we'll never know.  What we do know is he worked for a few months as a hardware clerk and joined the Fort Garry Horse Regiment which he trained with for two months.  At that point either fortune didn't favour Milton or he grew homesick and returned to Palmerston.

By the time he had returned home the war in Europe had been on for a year and the notion of it being a short skirmish was long forgotten.  The call for men to arms was at its strongest.  Canadians had only heard whispers of the devastation taking place.  Patriotism and blind faith were still strong in the minds of the impressionable youth.  With this and obviously seeking adventure Milton signed his attestation papers in Stratford on August 19th, 1915.

Almost immediately he was in uniform and had begun training.  By December of 1915 Milton was considered ready for war and was transferred to the 33rd Overseas Reserve Battalion which was slated to deploy to England in March after the next stage of training.  March 17th, 1916 saw the big day, Milton and his comrades loaded onto the S.S. Lapland (a former passenger liner) in Halifax and prepared to make the perilous but quick trip across the Atlantic.

The northern Atlantic is certainly not a very hospitable place in March by any  means and a ship meant for 1,500, but crammed with over 2,300 men, including equipment, animals and supplies would not have helped add any comfort in the cold turbulent seas.  After 8 days of zig-zagging across the pond the Lapland docked in Liverpool and the men were quickly marched to Bramshot-Liphook, the primary rallying point for the Canadian Expeditionary Force.

While in Bramshot-Liphook the reserve battalions continued their training and acclimatizing themselves to being in England.  The training was rigorous and exhausting for everyone involved, constant drilling, live ammunition training and everything in between kept the fresh troops ready for anything.

Finally the fateful day came and Milton was transferred to the 2nd Field Ambulance Regiment on May 25th, 1916 with the intention of crossing the channel to France and to begin support operations to the front lines.  As a part of the ambulance service Milton would see potentially horrific scenes and misery, but would have the luxury of only being near the front lines for short periods of time.  The prospect of having a slightly better chance of working in safer environments must been a huge relief.

However, as in life a simple change in fate happened.  Only two days after being transferred to the 2nd Ambulance, Milton was transferred again, but to the 7th British Columbia Regiment.  Army commanders had been receiving intelligence reports that the German forces in the area of Mount Sorrel had been building up.  Royal Flying Corps aircraft had spotted life sized models of the Canadian trenches built by the Germans for training and preparing for an attack.

In haste the Canadian forces were gathering every available body and quickly moved them over to France to reinforce the lines by May 26th.  The morning of June 2nd all hell broke loose as German artillery bombarded the Canadian positions, the front line forces were devastated, never had Canadian troops experienced such a massive barrage like this.  The enemy forces were described as pouring over the Canadian lines with fixed bayonets and overwhelmed their positions in lightning speed.

By early afternoon the attack was finally halted, the German forces had advanced nearly 600 yards from their original position and secured the geographical height advantage that Mount Sorrel possessed for the area.  The 4th Canadian Mounted Regiment was hardest hit in the attack and lost 626 of its compliment of 702 men.

Hastily the new corps commander Lieutenant General Julian Byng ordered a counter attack to begin at 2 am on the 3rd.  Reserve forces were quickly moved forward to retake the lost ground.  Milton was fortunate in being held back in reserve but on high alert for the call to help bolster the attack if progress was slowed in any way.  The attack was a bloody affair like so many more to come in the following years of the war.  The Canadians were tenacious and pressed their attack, they were able to recover much of the lost ground with the exception of Mount Sorrel and Tor Top hill.

The following days were a series of attacks and counter attacks, the German forces were able to dig in and fortify their positions on Mount Sorrel and maintain the height advantage.  June 10th the Canadian forces began their preparations for an assault on Mount Sorrel and Milton was a part of the forces moving forward, he would be involved in what would be considered one of the most important battles for the Canadian Forces thus far in the war.

The men hunkered down in their trenches and waited for the signal to retake the lost ground.  The Official History of the Canadian Army in the First World War described the following 48 hours perfectly:

To guard against further trouble on his left, the British 2nd Dismounted Cavalry Brigade, organized in three battalions, came on loan to the Canadian Corps as a counter-attack force.  After further postponement because of bad weather the Canadian operation was set for 1:30 a.m. on the 13th. It was to be carried out mainly by the 1st Division. Because of the casualties suffered by units of two of his brigades in the unsuccessful counter-attack of 3 June, General Currie regrouped his stronger battalions into two composite brigades. Brig.-Gen. Lipsett on the right had the 1st, 3rd, 7th and 8th Battalions, and for the attack on Tor Top Brig.-Gen. G.S. Tuxford (3rd Brigade) commanded the 2nd, 4th, 13th and 16th Battalions. The 58th Battalion (9th Brigade), plus a company of the 52nd, was to assault on the left. The 5th, 10th, 14th and 15th Battalions were placed in a reserve brigade under Brig.-Gen. Garnet Hughes.
Four intense bombardments of 20 to 30 minutes' duration carried out between the 9th and the 12th four times deluded the enemy into expecting an immediate attack; it was hoped that when none materialized he would suppose the artillery preparation for the real thing to be merely another feint. For ten hours on 12 June all German positions between Hill 60 and Sanctuary Wood were shelled unremittingly, particular attention being given to the flanks, from which machine-gun fire might be expected to enfilade the attackers. At 8:30 that evening, after an intense half-hour shelling which proved extremely accurate, the assaulting units moved up to their start lines - in some cases in no man's land. For forty five minutes before zero there was one more blasting by the heavy artillery, and then the attack went in behind a dense smoke screen and in heavy rain.
Brig.-Gen. Burstall had hoped that with so much artillery support our infantry would be able to advance "with slung rifles", and events proved him very nearly right. In four long lines the battalions pushed forward through the mud, each on a front of three companies-from right to left the 3rd, the 16th, the 13th and the 58th Battalions. There were occasional checks by fire from some machine-gun emplacement which had escaped destruction, or from grenades hurled by isolated pockets of Germans. But the majority of the Württembergers, completely surprised and badly shaken, offered little resistance.

The artillery bombardment would have been deafening, the intense heat created would have made the area an inferno, the description of "War is Hell" really would have not been far off in this case.  The official history describes the gallant yet "easy" attack for the Canadians, and by the morning of the 13th all lost ground had been recovered, Mount Sorrel and Tor Top had been retaken, the German forces were badly beaten and fell back.  It was deemed an "unqualified success", the Canadian forces had proven themselves without a doubt as a formidable force.

But, Milton was not able to revel in the accomplishment.  As his unit was moving out of the trench to begin the forward press Milton was struck by shrapnel from German artillery and fell back into the trench, never to get up again.  Milton unfortunately died alone in that hole as his comrades advanced.  Never to know the feeling of success in the heat of battle.

Perhaps he was lucky, only having to live through 2 days in the squalor of the trenches, perhaps he was unlucky for being moved from one regiment in relative safety to a front line force.  Either way he suffered alone in that trench for who knows how long.  His casualty card describes it as "death being practically instantaneous"..."practically"... a very open ended word.  A word that describes his entire life and service to our Country, he "practically" could have survived the war and he "practically" could have had a long happy life.
Either way we can say for certain, his memory lives on and we will continue to commemorate his sacrifice for a very long time.

​Lest we forget, their names liveth for evermore.